A recurring theme on this blog is the source that purports to be one thing while it is actually something else.  (In a previous post I discussed this regarding sources for Handel’s Messiah available on the IMSLP.)  Another recurring theme is the edition (or sometimes even manuscript) that changes over time without necessarily calling attention to those changes.  (A post considered this with the case of Bernstein’s Overture to Candide.)  This post combines a little of both.  And while this may all seem innocuous, I’m not sure that it is.

Musicians will be familiar with the American firm Dover Publications.  By the 1970s and 80s they had turned almost entirely to sturdy reprints of public domain editions.  Their output extends far beyond music, and I can remember browsing through their sales catalog, bemused and amazed by the range of reprints for which they could find a market.  Since the 1990s they have originated a few editions of music, but their bread and butter has been reprinting out-of-print editions at competitive prices.  In contrast to the reprints from firms like Kalmus, Dover has made durable products, and the blurb on the back (“this is a permanent book”) wasn’t much of an overstatement.  A few of the scores I’ve used the most have fallen into pieces, but many of the Dover books I got 25+ years ago are still in good condition.

In about 1997 someone at Dover had the bright idea of issuing miniature scores, which would open up a wider educational market.  There was a problem with this:  a lot of the scores they were reprinting originally had appeared in a very large format—say 14 or 15 inches tall.  That was the case of the old Bach Gesellschaft edition, from which Dover drew extensively.  Dover’s “large” scores were already a reduction of the original dimensions:  often 9x12, sometimes 8.5x11.  The smallest of the Dover “large” scores I’ve used is their reprint of Franck organ works, an oblong volume measuring only 8.25 inches at the spine; the original Durand scores from which these were taken measured some 10.5 inches at the spine (although with more generous margins).  The further reduction to a miniature score format can be awkward.

And that is apparently what happened.  Dover’s first release of study scores were the same size as their popular “thrift” reprints of literature, with dimensions of 5x8 or slightly larger.  Within a few years, the same publications (with the same ISBNs) were issued in a slightly larger format.  The images below show side by side these two issues of one of these early publications: 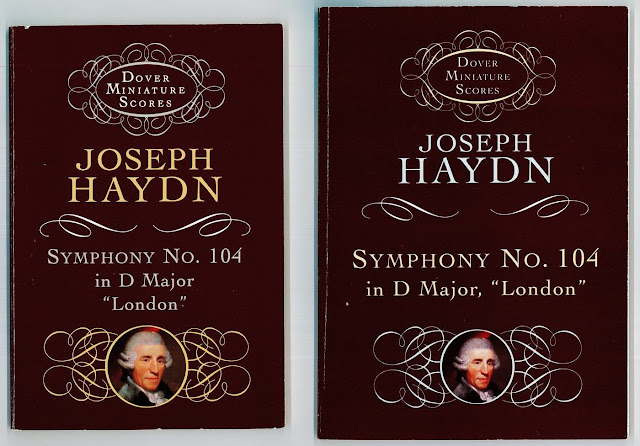 The score on the left I got in the fall of 1998 as desk copy for a course for which I was one of the instructors.  I’m not sure when I got the copy on the right, but judging from some notes I made in it I must have had it by 2002.  The key differences on the back cover:  the elimination of the clause “ample margins at the bottom of each score page for notes an analysis” (which itself betrayed that the dimensions of the publication were not calculated with the right “aspect ratio” for the matter that was to appear on the page), the addition of a list of some other available scores, and the increased price (marked-up 1/3).  The contents are the same, so far as I can make out, and it would surprise me if they weren't.

Note the source of this publication.  Here it is (again) from either copyright page:

The words “an authoritative edition, n.d.” scarcely inspire confidence.  Most of the publications in this series reprint the same edition that Dover issued in a larger format.  Ironically, the large-score publication of Haydn's London symphonies reprinted a series of miniature scores:
Eulenburg scores were designed to be small-format.  To my eye, Dover’s enlargement appears odd (there seems to be too much space between staves, too little information on each page) where the proportions seem right in the original format.

It would be reasonable to assume that the Dover miniature score was a reprint of this same text.  Indeed, the IMSLP has assumed as much:
But it isn’t so.  Below is a comparison of the first page:  the Dover 1985 (Eulenburg reprint) is on the left; the Dover 1997 miniature score is on the right.  (Apologies for the size of the image, but you can scroll back and forth as necessary to see the details.) 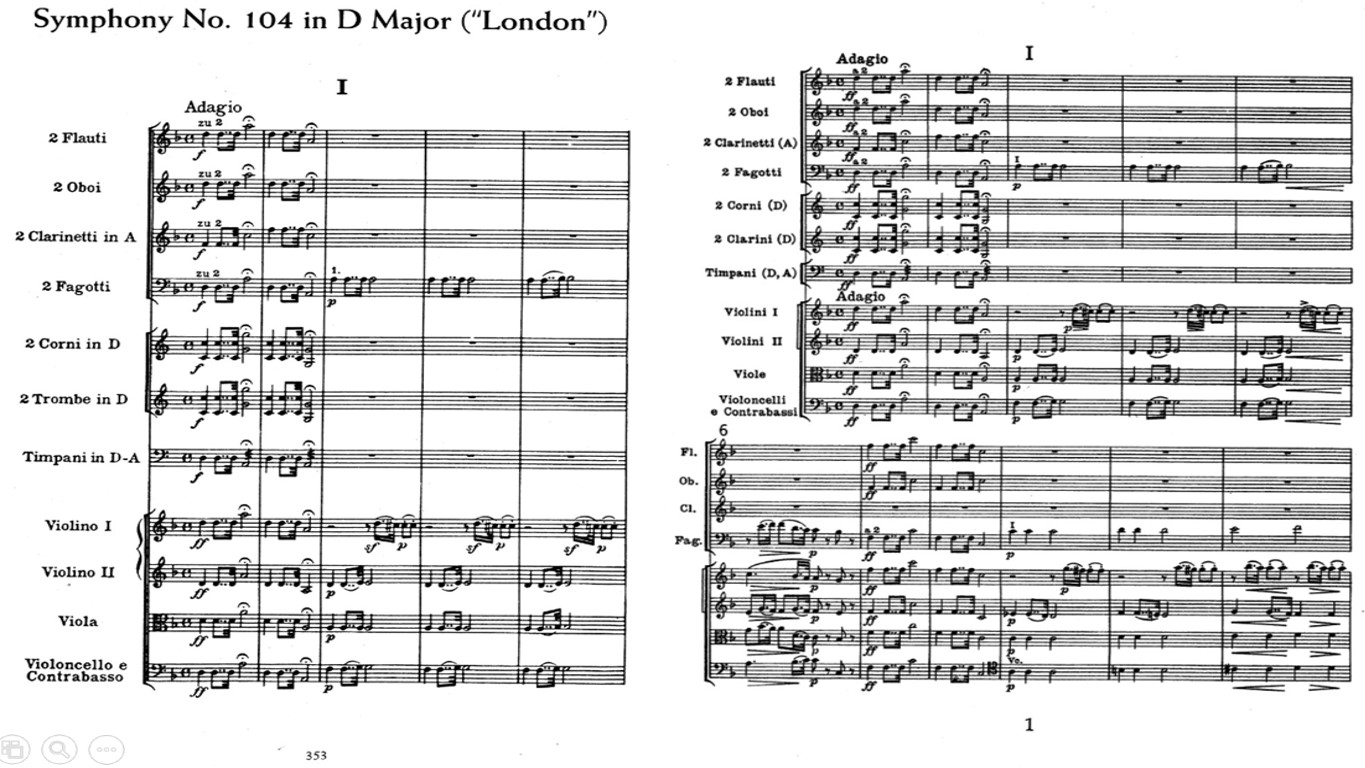 The score I refer to as Dover/Eulenburg (that is, the 1985 Dover reprint) is what it purports to be.  Here is the first page of the Eulenburg score, as proof of that:

What, then, is the “authoritative edition” that Dover reprinted in 1997?  It ought to be on the shelves somewhere—and readers at big music libraries might be able to lay their hands on it quickly.  I have pursued it via interlibrary loan (ordering up every edition I can find), but even then editions can be miscatalogued in so many ways.  I haven’t found it yet, and I would be glad to know.  Anyone?  I will be delighted to have an addendum to this post once the source edition is located.

ADDENDUM  21 June 2021
Many thanks to Rex Levang for pointing out that the mystery text appears now on the IMSLP as a Soviet edition (IMSLP #494060), but there is no indication of whether that edition itself was a reprint.  (I suspect it is--it just doesn’t have the look of a Soviet edition to me, although I freely admit that I can’t muster any specific evidence to support that opinion.)  The IMSLP cites Gyorgy Kirkor as the editor, and all twelve of the London Symphonies appear in the same imprint.  If this was an original edition (i.e., not a reprint), it is an odd choice for Dover.
Email ThisBlogThis!Share to TwitterShare to FacebookShare to Pinterest
Labels: comparing editions, Dover, Eulenburg, Haydn, IMSLP, misattributions, Moving Targets
Newer Post Older Post Home