As will be gathered from the title, I will be doing an occasional series of “moving targets” posts.  In these posts, my targets are not the musical works so much as the editions of them—editions which change while under cover; sometimes under the same physical cover without any notice from publisher of the nature of the changes.  Sometimes the ISBN or ISMN remains the same, so that the alterations might only be discovered by accident when they are not advertised as “corrected.”  But even when they are so advertised, it isn’t always immediately clear what we hold in our hands.

For a while in the second half of the twentieth century, the concept of the Fassung letzter Hand held sway in scholarly editions of music, particularly those of 18th and 19th century music.  To a certain extent it still does.  It doesn’t really translate well:  “the version of the last hand” doesn’t convey much.  It really means something more like “the last authorized version.”  The concept has even been stretched to mean the version the composer indicated in some way that (s)he preferred, even if (s)he never documented it precisely.  (A good example of this is William Walton's opera Troilus and Cressida.  The version that appears in the William Walton Edition is not one the composer ever heard or even put down on paper, but it is consistent with the comments he made about the 1976 Covent Garden revision:  he preferred the cuts, but he didn't like the transpositions and other alterations to accommodate Janet Baker's lower tessitura.)  And of course the idea of “new and improved” is a good marketing tool for selling another copy of something to someone who already owns it.  So even if some musicologists have moved on to “process editions” which document a piece in various stages of its existence, commercial publishers love it when a composer’s final thoughts can boost sales in an already established work.

In the course of looking into something for quite a different post appearing months hence, I stumbled across an interesting example of this.  I knew already that Leonard Bernstein's Candide has a complex textual history.  The show has been different things at different times, not only with lots of music scrapped and then resurrected (sometimes with entirely new lyrics, assigned to a different character), but the whole book replaced and then later patched and re-patched.  A good sign of this textual confusion is the copyright page of the only published full (i.e., orchestra) score of any version of the show—billed on its title page as “”SCOTTISH OPERA EDITION OF THE OPERA-HOUSE VERSION / (1989).” 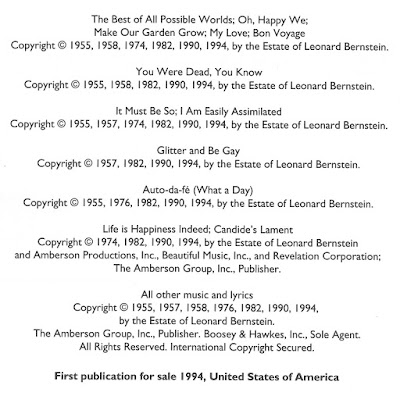 And of course this doesn’t account for the further vicissitudes this work has undergone since Bernstein’s death in 1990.  I don’t expect to live to see a comprehensive critical edition of Candide.  It would probably take at least four volumes:  the 1956 version, the 1973 version (in which Bernstein took no active part, but which had great consequences for the subsequent manifestations), the 1988 version, and a huge appendix of all the other material, including details of at least the 1971 and 1982 versions.  The only project I have run across that seeks such comprehensivity in a work with such textual complications is this edition of Bizet's Carmen, but I don't know how much of it has actually come to fruition, as all of the information detailing what it was supposed to encompass has disappeared from the web.  [Here are scans of a few pages I downloaded a few years ago.]


While this publication encompasses the complete score, it by no means reflects a final, frozen show. Like its hero, Candide is perhaps destined never to find its perfect form and function; in the final analysis, however, that may prove philosophically appropriate.

Fine.  But Boosey & Hawkes seems to want to have it another way.  In this self-same 1994 score, we find the following notice:
And yet, when the overture was included in Leonard Bernstein Orchestral Anthology, vol. 2 (1998), we find a notice that at first glance would amount to pretty much the same thing:
These two scores cannot present identical readings, however, because the instrumentation is substantially different.  The 1998 score presents what must be called—although it isn’t anywhere that I can see—the “concert version” of the work, scored for full symphony orchestra (basically triple wind with three percussionists, in addition to timpani).  This scoring seems to be Bernstein's own, as here is the first page of his manuscript (according to the Bernstein website).  This orchestra is too big for a theater pit, and always was.  The original 1956 Broadway recording is for a smaller ensemble, and from my listening it seems to correspond closely to scoring of the “Scottish Opera” version.  (The two aren’t quite identical, at least to my ear:  the most prominent differences are in the percussion.)  The reduced scoring—and reducing also the expense of remunerating musicians—cuts and redistributes the music of one flute, one oboe, two clarinets, two bassoons, two horns, a trombone, and a percussionist.  That saves 10 players, not counting shrinking the string sections too.

Listening to the 1989 recording, one finds that Bernstein actually used the full symphonic scoring for the overture, and the reduced scoring for the rest of the show.  (Just listen to the percussion at the beginning.  If in doubt, watch the live performance given a few days before the recording was made.)  Thus, despite the apparent contradiction because of the different scoring, both statements reproduced above could be true, as both texts do relate to the 1989 recording.  But it seems more complicated than that.

Although the 1994 publication is the only edition of the orchestral score of the complete show, the overture has been published in score three other times (not counting arrangements for band, etc.): in 1960 (G. Schirmer), reprinted with a few alterations in 1990 as “corrected edition” (Boosey & Hawkes), and newly computer-generated in 1998 as “corrected edition” (in the Boosey & Hawkes Anthology mentioned above).  I do not want to bog down this blog with all of the textual variants of these three editions, but the findings of my somewhat hasty collation of these sources are here, for the most indefatigable of readers.

A few of the most audible differences are worth mentioning.  One is the tempo:  the 1960 version is quite a bit faster (half-note = 152 at the beginning; whole-note equals 96 at the coda) than the subsequent editions (half-note = 132 at the beginning; half-note equals 152 at the coda), although the original metronome marks appear in the 1976 vocal score of the 1973 version.  This slowing down of the whole piece is consistent with Bernstein's own recordings.  His recording with the New York Phil made on Sept. 28, 1960 is at the tempi published in 1960; his 1989 London Symphony recording is at the tempi published in 1990.  In this respect at least the scores published in the 1990s can be said to reflect his performances in 1989.

This is not always the case.  The 1998 score (which claims to reflect changes made in 1989) includes an interesting change made at some later point.  Bernstein's performance 1960 recording, 1989 recording (and indeed the 1989 concert performance) all give this reading for the cymbals.  Note particularly the two clashes in b. 51
The 1998 score—and only that score—prints this:
Sensible though this is (i.e., aligned with the brass pattern), it is nowhere to be heard on Bernstein's recordings, nor indeed on any recording I have located before the 1997 “New Broadway Cast” recording.  It is not in the 1994 score, which claims to be based also “on the manuscripts of Leonard Bernstein at the Library of Congress.”  One wonders on what authority this change was made.   I haven’t seen those manuscripts, but even if the 1998 reading accords with the original notation, do we know enough—does anyone know enough, that is—about how the 1960 reading came about to know it does not have an authority superceding the original?  Is it an accident that has been performed faithfully for decades (and recorded by the composer), or is it the correct reading?  Are Bernstein’s recordings of it evidence of at least tacet acceptance?  And if the 1998 score is going to interpose such a change, should there not at least be some indication of how and/or why?  (The battle scene in Act I of the 1994 score (no. 5f) has at one point cymbals matching the reading of the 1998 score of the overture, and that might have been the source of the change; but I would like to have been told.)

I think the most curious variant reading is one that was revised at some point before the 1989 performance and recording.  The 1960 reading of the horn line in the final canon before the coda was this:
Note the lack of a syncopation at the end of b.227—and it is to be heard thus in the early recordings, even though this departs from the strict canon with the other upper parts.  For me the puzzle is why it was ever this way at all—but it upholds the old maxim of philology that the more “difficult” reading is more likely the original.  (Who would think to modify it to this reading?)

The three scores printed in the 1990s all give the syncopated figure, yielding a more conventional strict canon:
And, until now, that was the way I thought it had always gone.


I will return periodically to instances of publishers accumulating more confusion than clarity.  That works exist in multiple versions doesn’t trouble me in the least.  Indeed, I find such differences to be of consuming interest.  But I am irked when a publisher makes a text more difficult to access, and particularly so when the information is ambiguous or misleading.  Still, it does give me something to write about.