The weather is fright’ning—
The thunder and lightning
Seem to be having their way;
But as far as I’m concerned,
It’s a lovely day.


Even with that epigram, this is the ninth installment in my now-slowed-down-but-still-appearing

This post is essentially a bit of the pre-history of this blog, and there will be more of that in time.  For now I want to tell about the time that the rainy weather changed my professional trajectory entirely.  And, as Irving Berlin put it, oh, what a break for me!

I have mentioned in passing that I am an organist, although this is very much an avocation.  I don’t really keep up my organ playing as I ought to, and for the first time in 15+ years I’m in a job where (with no organ on campus) I can’t just walk down the hall to practice.  I need to make more effort, and to make time for it.  But I do occasionally fill in for various congregations when the organist has to be away.  And so it happened one Sunday (25 October 2015, to be exact) that I was on the bench of a big downtown church in Greenville, SC for both morning and evening services.  I had a busy afternoon in between, so I had to choose music that I could pull together on minimal practice time.  Usually for me this means Bach, as you can pull the stops and go:  you don’t have to work out complicated registration changes unless you want to.   As on that day the church was celebrating Reformation Day (about a week early), Bach was a natural choice anyway.  I had learned from experience that this congregation didn’t listen to the postlude, so I chose something short and to the point for the evening service:  one of Bach’s settings of Luther’s German paraphrase of the Gloria, “Allein Gott in de höh sei Ehr.”  There are a quite a number of Bach settings extant, but I chose BWV 715, one of the easiest, flashiest, and most striking.  It is one of the six (extant) so-called “Passaggio chorales” which probably manifest something of the sort of chorale playing that got Bach in trouble with his congregation in Arnstadt in February 1706 after his Buxtehude pilgrimage:


“Reprove him for having hitherto made many curious variationes in the chorale, and mingled many strange tones in it, and for the fact that the Congregation has been confused by it.”  [trans. in The New Bach Reader, p. 46]

In these works, the chorale is stated with a dense and aggressively dissonant in-your-face style harmony, with interspersed flamboyant runs and arpeggios.  (Hear Ton Koopman performing this work here.)  Think Jimi Hendrix playing the “Star-Spangled Banner,” but in a high Baroque vocabulary.

That morning between services as I was running through the music for the evening, it occurred to me that the dense chromatic writing would make good fodder for an exam I would be giving on the following Tuesday to my Theory II students.  Then I had an extra credit idea:  spot as many sets of parallel fifths/octaves as you can.  And would my students notice the disguised B-A-C-H in the last two bars?
And so it happened that on the next morning I was sitting in my office working on the theory midterm exam, and I remembered my idea for the analysis question.  I discovered that I had left my organ score in my car.  Looking out the window to see a cold rain pouring down, I thought I’ll just go to the IMSLP and use the old complete works edition.  I had been playing out of the Bärenreiter offprint of the NBA text.  (These offprints sometimes include corrections, although the text in this instance was identical with that reproduced above.)  When I pulled up the BG edition, however, all but one of my parallel fifths/octaves were gone:

Although I had followed Bach research casually over the years, Bach was not at all my area of study.  I was intrigued by this, however, as it seemed like a pretty good example of different editorial ideologies:  the “1893 Bach” couldn’t have possibly intended such solecisms; the “1961 Bach” was a brash rebel.  It was a music textual equivalent of the difference between these famous representations:
Of course I wanted to know more, and promptly set aside the midterm.  The college library had many of the NBA scores but none of the NBA critical reports.  I e-mailed Patricia Sasser, the music librarian at Furman University just up the road, asking whether she could send me a scan of the page or two covering BWV 715 from the relevant critical report.  Within about an hour she graciously responded, but it only whetted my appetite.  When I asked for a few more pages and explained what I was looking into, she replied “That sounds like a paper for AMS-SE [the Southeast chapter of the American Musicological Society].”  At first I thought it was nothing more than a diversion from the work I ought to be doing, but having spent an hour pulling out all of the editions of Bach’s organ works that I could lay my hands on, I realized I was obsessed.  It did become a paper for AMS-SE, with the most complicated hand-out I’ve ever put together.  Here’s the first page of it: 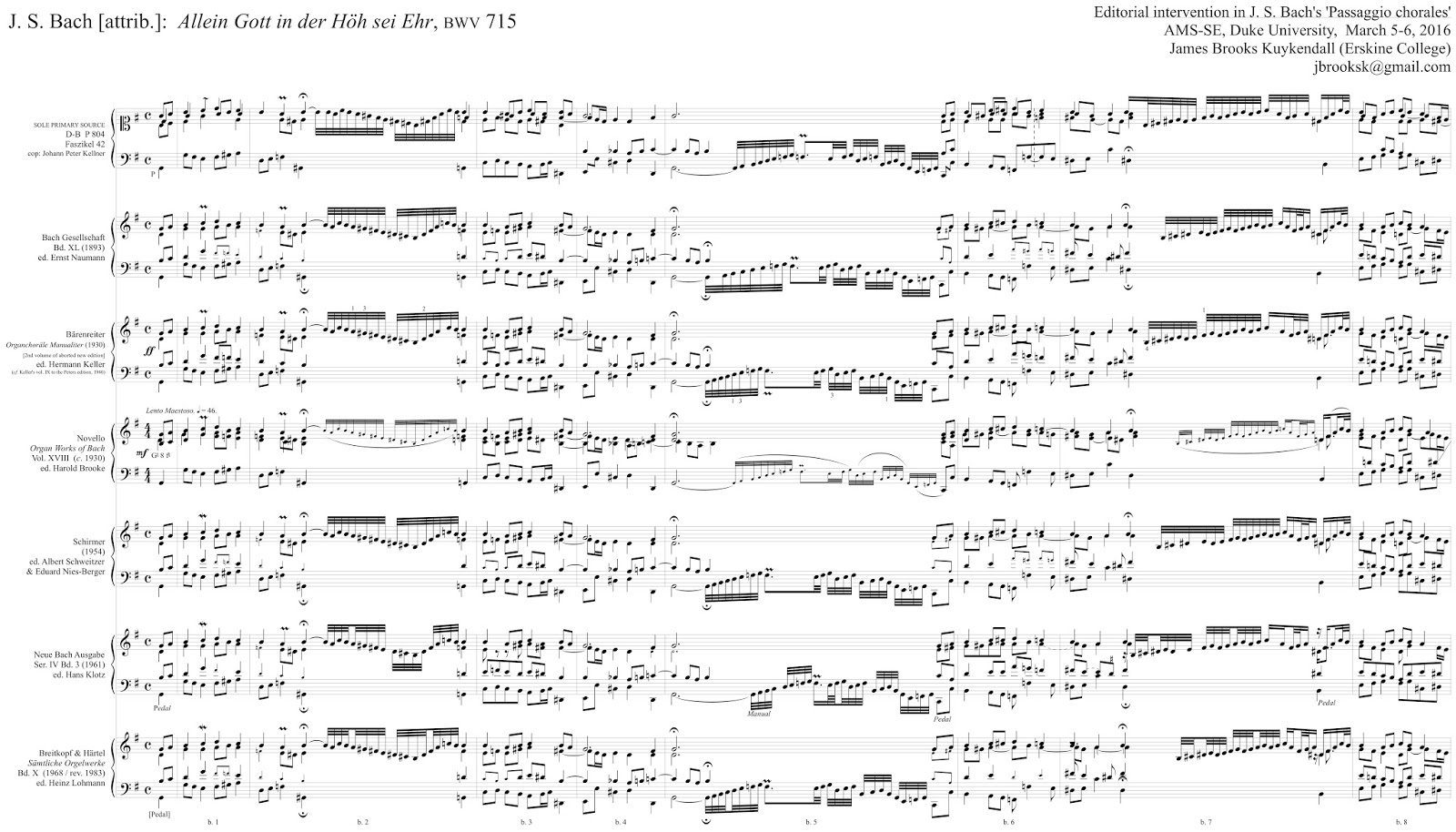 There are six extant passaggio chorales attributed to Bach:
These six works offer a great perspective on the editing of Bach’s works because 1) none of them survives in his hand (although they do survive in manuscript copies from quite close to him) and 2) the texts conveyed by surviving sources are problematic at best.  None of these works was published until the 1840s.  Indeed, BWV 715 (together with BWV 726) actually did not make it into print until the 1893 BG volume.  These two chorales survive together in a manuscript copy by Johann Peter Kellner—neither a student nor a close colleague of Bach, but his sometimes flawed copies are nonetheless important sources for much of the Bach repertoire (as Russell Stinson has shown).  However audacious Bach’s chorale playing might have been, Kellner’s copy of BWV 715 is manifestly deficient—not only frequently omitting voices haphazardly, but giving harmonies that are implausible in their own terms or as the result of the counterpoint.  The start of Kellner’s manuscript is this:
Here the irregularity of the part-writing (at times three, or even just two voices) is surely suspect:  voices don’t merge, but they just disappear for a few beats, mid-phrase.  When the same melody is reharmonized a few bars later,
that initial quartal harmony is, to the say the least, eccentric.  There are, indeed, enough problems here to make me wonder if Kellner was working from a fully-realized score at all, particularly as the four extant chorales apart from the two Kellner copied exist in two separate lines of transmission—one with full realized harmonies, and the other employing figured bass.    If Kellner was trying to realize the figured bass, though, he did it exceedingly poorly in this case.

All of this warrants further discussion, and this summer I was at work on an article about the editing of these works over nearly two centuries, but I had to put it aside when a new source for BWV 715 emerged.  It appears in a practical notebook of 154 pieces (mostly chorale settings) described on its label as being from the repertoire of Bach’s student Johann Christian Kittel (1732-1809—an exact contemporary of Haydn).  This notebook is dated 1800, and is the work of one Johann Christoph Bach (1782-1846), an organist in Bindersleben.  Speaking of eccentricities, this Bach copies some of the pieces across the full spread of an opening (verso and recto), so that there are only four systems in image below, with the gutter of the binding crossing through each of them:
What I note about this source:
Curiously, BWV 715 is the only one of the 154 pieces in this collection to be attributed to J. S. Bach.  There are several other passaggio chorale settings—not surprising, as it was a common practice for chorale playing during the eighteenth century.  If Kittel was the conduit through which BWV 715 entered this collection, it suggests that JSB didn’t regard this showy style of harmonizing and peacock preening as a youthful indiscretion set to annoy his Arnstadt elders:  he was still conveying it to his students in Leipzig in his very last years.

Nevertheless, these pieces have been tainted in some of the Bach literature as unworthy of the master.  On that rainy October morning, one of the first commentaries I pulled off my shelf was candid: 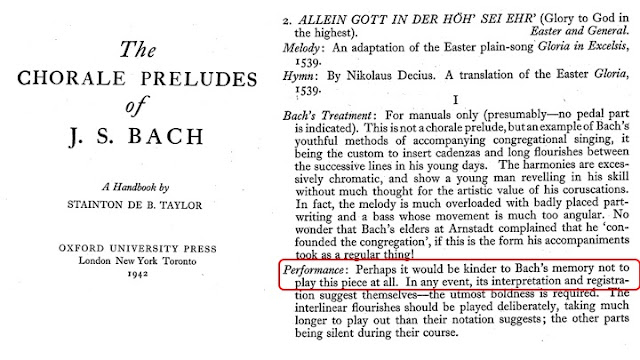 I have much more to say about these pieces, and eventually I need to get around to writing that article, if it doesn’t get scooped.  In the meantime, I reflect upon the strange intersection between weather and career:  if it hadn’t been raining on that Monday morning, all of the subject matter of the blog would have remained for me just items of idle curiosity, and you wouldn't be reading this now.

Long as I can be with you, it’s a lovely day.