With this twelfth post, it is time to retire my logo for the

My plan (starting in December 2016) was to start each month for a year with a Bach post.  Life got in the way of that, so it has taken me eighteen rather than twelve months to complete.  In any case, this will not be the last Bach post.  As I have already written, the pre-history of this blog was a Bach episode; more than that, as I have been acquiring cheap secondhand copies of the critical reports of the Neue Bach-Ausgabe in the last two years (now 56 and counting), I expect to return to Bach textual issues for years to come. 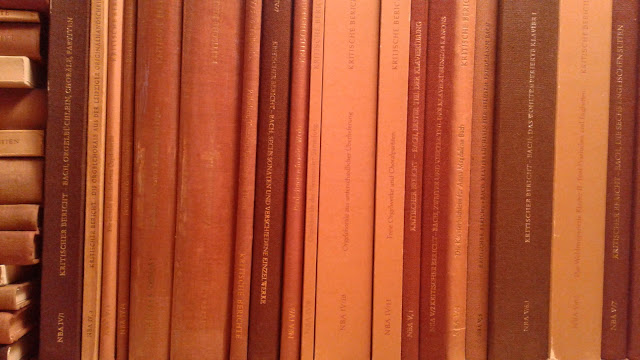 For this post, though, I want to puzzle over some of Bach’s impossible notes.  I don’t mean notes that are unplayable (that is, that the technique that is required is truly prodigious, like Schoenberg’s claim that he was willing to wait for evolution to produce a violinist with a little finger long enough to play his concerto properly), but rather notes that are beneath the range of the instrument.  For most instruments, it’s difficult to say there is an upper limit to the range; along comes a player who can top it.

One of these impossible notes has puzzled me for years—the low B in b. 94 the Pièce d’orgue (a.k.a. Fantasia in G Major), BWV 572.  It is a note which did not exist on the pedalboard of any organ Bach is known to have played.  (Linked here is a great resource about the organs of Bach’s milieu, and also access to free recordings of the whole corpus on preserved instruments of Bach’s time.)
Indeed, that B doesn’t exist on any pedalboard I have ever played either.  Apart from some old English organs that might have pedals down to the G below, or French instruments extending down even to F (pedalboards which are, to say the least, rather different animals than those in Germany), you would need something like the Marshall & Ogletree “international touring organ” made for Cameron Carpenter to play Bach’s low B as written.  Carpenter’s is an instrument that figuratively goes “up to eleven” (. . . and literally goes down to G).
No manuscript of BWV 572 survives in Bach's hand.  Most, but not all, of the early copyists transmit the low B apparently without question.  Johann Peter Kellner’s copy moves the B up an octave [at right]—an emendation to a text that seemed to him manifestly erroneous?  (Kellner is known to have taken liberties with the texts he copied.)  My sense when I play this piece is that some sort of rhythmic articulation is needed in the bassline on the midpoint of that bar, so that I will at least strike the B again (as Kellner’s copy indicates) if not actually to add another 16’ stop in the pedal (to suggest the effect of the lower octave).

The Kellner copy—indeed all of the eighteenth-century copies, and Bach’s default layout in his organ works—transmits the work on only two staves (rather than the three staves we expect of organ music now).  Often these sources will indicate “Ped.” at certain points, although the absence of the instruction to play on the pedals need not imply that an organist wouldn’t use them.  I am intrigued, though, to see the suggestion in Breitkopf & Härtel’s new edition of the organ works that—despite the title Pièce d’orgue, transmitted in many early sources—this music may have been originally intended for the harpsichord, which by Bach’s time generally had a compass extending down to the G or F below the bottom C of the organ [p. 18].  The five-part writing is playable with two hands alone (albeit awkwardly at times), but—in my hands, anyway—becomes unplayable at about b. 178.

Peter Williams (p. 170) reports the startling fact that this low B is not unique in the texts of Bach’s organ works.  It appears, for example, in Kellner’s copy of the C major transposition of the E Major Toccata, BWV 566—and doubtless it is the downward transposition that explains its presence there.  Indeed, Kellner writes the B almost apologetically in parenthesis, and doubled the octave above [below left, for example].  A low B is called for in the manuals in a copy (also Kellner’s?) of the C major Toccata, BWV 564, where it is the last note in the final cascading figure before the final chord [below right].  In that instance it makes good musical sense; it just can’t be played—even by Cameron Carpenter (unless he took the whole piece up a half-step--a gimmick he has been known to use).

What makes the unapologetic presence of an impossible low B in BWV 572 so perplexing is that at two other moments in the same piece Bach ostensibly writes his way around notes that were unavailable to him on the organ.  For example, the climax of the movement is a prolonged march up the pedalboard, both beginning and ending with a deceptive motion from D to E.  The top E was not within the compass of the majority of organs Bach knew.  Is it significant that he deftly avoids it in b. 172?
Maybe, but not necessarily.  Satisfying as it is to play that long scale up, I find something even more satisfying about the leap down in b. 171:  it suggests that a cadence is imminent (in a way that just another whole note would not), yet once more the resolution is avoided—and the downward leap enables Bach to reach the lowest(?) note of the pedal (b. 175) pretty quickly by means of another scale down.  The overuse of the word awesome has made it trite, but I think this is a passage that deserves the adjective in its truest sense.  Whether or not the high E was available to Bach, he has made a virtue of not calling for it here, and brings the manual tessitura down at precisely the same moment, so that it can expand outward again.

This expansion happens over a long dominant pedalpoint, and again the register change in the pedal appears as if Bach might be avoiding an impossible note:
Because of the economic use of the so-called “short octave,” many German instruments in Bach’s time lacked the rarely-needed bottom C-sharp—and sometimes the D-sharp as well.  (The huge pedal pipes were, after all, the most expensive to build.)  This might explain Bach’s leap up an octave in b. 184 . . . or then again it might not, as the octave motion again intensifies the advance of a cadence which is then rudely interrupted.  In any case, the low C-sharp is not there—as, for example, it is not on this 1722 Silbermann pedalboard [at right].  Curiously, though, the earliest known copy of BWV 572—a copy made by Bach’s cousin Johann Gottfried Walther—has a low D whole-note throughout b. 184, even though the ensuing C-sharp is thus a dramatic leap up.

Browsing through the sets of performing material for the much-revived early cantata “Ich hatte viel Bekümmernis,” BWV 21, I note that the various sets of performing material are inconsistent about this sort of problem:  in an early version, a cello and organ are both given a non-existent low B-flat [top row, left and right respectively, the last note in the images]; in a later transposed version, the copyist of the cello part (transposed up) has an erroneous D when C would have been reachable [bottom row, left—the wrong note is circled]; and a copyist of a basso continuo part (transposed down for Chorton pitch) replaced corresponding non-existent low A-flat up an octave [bottom row, right].
For a bona fide example in which Bach was compelled to devise a creative solution to accommodate a melody that would otherwise go below the range of the instrument consider these two versions of the conclusion of the opening ritornello of the “Deposuit” from his Magnificat.  In its original version (BWV 243a—the Magnificat in E-flat), the unison violins end powerfully on their lowest note, the open G; when the work was revised in a downward transposition to D major (BWV 243), the needed low F-sharp wasn’t available, so Bach conceived a dramatic swoop up two octaves in compensation:

The cantata “Mein Gott, wie lang, ach lange?,” BWV 155, yields a puzzle that would truly flummox us if we lacked contextual evidence.  In the bassoon obbligato for the second movement duet (a movement that always has me thinking that Horace Rumpole is about to enter), at one point Bach reaches down for a low G, fully a minor third below the B-flat that is conventionally the bottom note of the instrument.  Notice here—the very last note of the top staff—that in the autograph score Bach has taken pains to clarify what note he has written, marking it “G” directly above the note with the three ledger lines:
You can find references here and there positing a “semi-contrabassoon,” but that instrument as such is unknown for Bach.  (There is an extant Thuringian contrabassoon dating to 1714, but much of this solo is too high for it.)  Nonetheless, as Bruce Haynes has emphasized, “Bach consistently distinguished the ‘Fagotto’ from the ‘Bassono’ by key/pitch . . . [with] the latter a m3 lower” (p. 139).  The “Bassono” is thus, if not a semi-contrabassoon, in effect a “sub-bassoon.” Although the NBA volume for BWV 55 makes no comment at all regarding any of this,  the curious low G in the passage above must be a consequence of that most vexing subject, the difference between Kammerton und Chorton pitch.  It would help, of course, if the original performing parts for this cantata survived to confirm this; in this case they don’t, but in another pre-Leipzig cantata, BWV 31, we have woodwinds parts notated a minor third higher than the rest of the ensemble.  (BWV 150 is preserved with a similar transposing bassoon line in a score apparently copied from parts.)  BWV 55 must thus have been conceived for a low-pitch bassoon so that the sounding G (in terms of the rest of the ensemble) would be just its bottom B-flat.  The highest note of the solo, the sounding D (two and half octaves higher), would be then just the high F—high but well within the normal playing range of the instrument.  Problem solved.

Or not.  None of this answers the most important question for the player hired for the gig:  How do I play this?  The advice in the NBA regarding BWV 31 seems almost absurdly obvious:  “die zu tief liegenden Töne . . . des Fagotts müssen durch Stimmknickung umgangen werden”  (p. vi). Roughly “you have to get around the bassoon notes that are too low by tampering with [more literally bending] the part.”  So we bend the truth just a bit.  My guess is that only the conductor needs to be told that.