[In the wondrously beautiful month of May
as all of the buds were bursting,
then in my heart
love unfolded.]

The opening quatrain of Heinrich Heine’s Lyrisches Intermezzo (1823) is stirring enough, but it is almost a cliché to point to the beginning of Robert Schumann’s song cycle Dichterliebe (1840) as reaching heights (and depths) that Heine’s words cannot.  The unutterable longing expressed somehow in the initial piano figure, wavering back and forth in a repeated (it seems) Phrygian half-cadence, D – C-sharp – D – C-sharp in the bass, until it suddenly resolves not into F-sharp minor (to which our ear may be leading us) but with disarming ease into A major.  (A recording is available from the IMSLP here.)

Schumann pointedly leaves this figure unresolved when it returns at the end of the song, the ambiguity persisting several seconds into the next song (again resolving in A major).  It is a great moment—hauntingly beautiful, as I suppose it is intended to be.  And, because of such inspiration, Schumann’s place among the canon is secure.  Or is it?  After all, the canon is really just whoever we say it is.

I moved to Virginia in July 2017, and a few weeks after I arrived white supremacists gathered in Charlottesville, about 60 miles away, for a demonstration that turned deadly and seized headlines all over the world.  Appalled and repulsed, I watched white men—people who look like me—proclaiming their entitlement, endeavoring to reclaim privilege they regarded as their birthright.  Even as they chanted their vile slogans, I was working on my syllabus for the second part of a two-semester music history survey for music majors I would start teaching later that month.  As I struggled to pack far too much essential content into a semester, I wistfully thought of all the things I wouldn’t have time to talk about—things that revealed that the claim of entitlement on rampant display a short drive away was really a recurring story in music history.  (“Jews will not replace us!” is the essence of Richard Wagner’s notorious 1850 essay Das Judenthum in der Musik.)  Us versus them is, indeed, the story of so much history that its continuing manifestations in the headlines now seem more akin to “DOG BITES MAN” than to “MAN BITES DOG.”  But when, as is the rule rather than exception in history, the violence is perpetrated by those in power against those excluded from it, the news must always be shouted from the rooftops.

And so in my first year teaching in Virginia I introduced an overhaul to the music history sequence, jettisoning the soup-to-nuts survey from plainchant to the present (an approach which gives students a false sense of comprehensiveness).  Instead I used the allotment of two semesters for a different approach:
As will be clear from this blog, Great Composers is (sic) very much my bread and butter.  Even in my first post I tried to be candid that dead white males would inevitably dominate my posts, if for no more nefarious reason than their music generally has a longer paper-trail.  That said, I have been keenly and uncomfortably aware that I have yet to post about the music of a female composer (even though a number of female editors have come up).  As we begin Heine’s “wondrously beautiful month of May,” however, I make this humble effort to emend my ways.

Does this sound familiar?  (Listen to it here.)
This is from the slow movement of the Piano Concerto in A minor, op. 7,  by Clara Wieck (later Clara Schumann).  She wrote this in about 1835, and it is a striking anticipation of Robert’s “wunderschönen Monat Mai” figure—the same two harmonies wavering back and forth, even expressed in the same key.  Is it too much to say Robert stole it from her?  He clearly knew the piece well.  An inside joke?  An unintentional derivation?  Common property of husband and wife?  Admittedly Wieck doesn’t use this gesture to slip into A major, as Robert was to do.  More remarkably, this is part of a transition to A-flat major—very far removed from her home tonic.  Indeed, Claudia Macdonald quotes an early reviewer who attempts a chauvinist joke about this:


Women are moody.... [I]f in their cherished domestic and matrimonial circumstance the daughters of Eve would make no other, larger leaps, deviations or evasions than such a teensy half step, then everything would be just fine.

Did Robert face this sort of nonsense when, in his piano Phantasie for piano and orchestra (also in A minor, and later revised as the first movement of his own concerto in that key) he also modulated to A-flat major?  Or was that just genius?  Granted, Robert’s choice of A-flat may be dictated by a strategy to emphasize melodic unity:  he preserves C-natural as the third scale degree, on which he begins his motive whether in its home minor key or—with the tonic lowered by a half-step—in major:
Still, there is something about the same tonal maneuver (A minor to A-flat major and back) in both works that to me has a sense of “anything you can do, I can do better” about it.

Much as I love and admire the work, I did not include Robert’s piano concerto in my music history class; I featured him instead in the song-cycle part of the course.  I did, however, use Wieck’s concerto—a work hitherto completely unknown to me.  Her anticipation of the “wunderschönen” figure arrested my attention, but I was equally struck by very many blog-worthy textual details.

The source situation is pitiful:  no autograph from Wieck survives; the only manuscript that survives is Robert’s and is fragmentary, as it seems he orchestrated her finale.  (Like his own concerto later, Wieck’s work started as a one-movement Concertsatz, though in her case it was what would later be the finale.)  There is no extant manuscript of any sort for the first or second movement, and until 1990 the only edition of the work was its first one, published by Hoffmeister in about 1836, and handily available on the IMSLP (#566786).  (A 1987 “edition” reproduced a manuscript full score apparently derived from the Hoffmeister parts.)   I’ll come back to the original edition below.

More than anything else, I have been intrigued and fascinated by rhythmic details of Wieck’s score.  Note, for example the stunning variety of rhythms in the piano sprays tossed off here—at a tempo that make these differences barely perceptible to the audience:
(I also like the way the bassoon accumulates longer and longer statements, starting from just the initial motive of the main theme.)

I also noted places in which the solo part has very slightly different rhythms from other instruments doubling the same idea.  In this example, I think she has accommodated the large left-hand jump made across the bar-line:

A similar motivation seems to be behind these alterations:

But I confess that I am flummoxed about what to make of this rhythmic notation [though see ADDENDUM]:
The illustrations above come from the new edition issued by Breitkopf & Härtel in 1990, edited by Janina Klassen.  As I compare the cover pages of the original Hoffmeister and the new edition [below], I wonder if Breitkopf’s decision to refer to her only by her married name isn’t just a marketing ploy, linking her music to the canonic name of her famous husband.  She was not yet married when it was first published, and her name was much more widely known than Robert’s was at the time.  She was a pianist of international renown already at a young age.  Indeed, she was just sixteen when she premiered the complete work on 9 November 1835 with Felix Mendelssohn conducting at the Leipzig Gewandhaus. 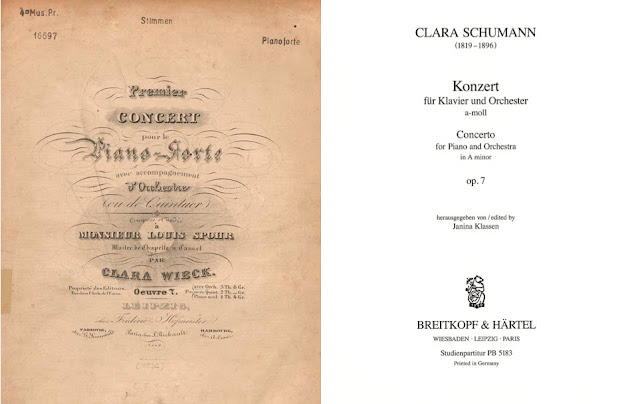 Despite the many virtues of the new edition, the Hoffmeister original is particularly useful in the classroom, as it exemplifies the practical publication of this sort of work in the nineteenth century.  In place of a full score, the piano part includes orchestral cues throughout (and, as the title page indicates, could serve for rendition of the work by piano alone); the first violin part is similarly cued to facilitate directing a performance; all the string parts have small-note alternate lines to enable the piece to be performed with only a string quintet accompaniment.  Here, for example, is the bottom of the first page of the violin part, bearing the instruction that notes marked avec Quintuor (as on the second staff) are for this chamber version, while the other instrumental cues are only there to assist a violinist/conductor:
In the absence of any other sources, it is impossible to know whether the quintet adaptation is Wieck’s or Robert’s, or maybe even an in-house job by the Hoffmeister firm.  Indeed, in the absence of any other orchestral works by Wieck, we cannot even make a guess about whether the orchestration in the first movement is her own.  I have been puzzled by remarks such as “Whether [Robert] Schumann orchestrated the other movements is not known”:  except for a solo cello, the orchestra is entirely silent in the second movement.  Sometimes I suspect that we musicologists get so caught up in the commentary that we fail to look at the very music we study.

This is only one aspect of a problem musical women (whether composers, performers, or patrons) have faced for a very long time:  seen and not heard, recognized but not valued, subject always to the male gaze but essentially invisible.  (For a recent ripped-from-the-headlines example of an analogous situation, see Imani Mosley's perceptive reflection on the “erasure” of Peter Pears from the public face of the Benjamin Britten legacy.)  I am grateful for initiatives that facilitate addressing this issue—for example the Institute for Composer Diversity and the database Music Theory Examples by Women—and for writings by Cyrilla Barr, Ralph Locke, and Marian Wilson Kimber (among many others) that I now view as required reading for my students.  Systemic prejudice against women composers; exclusion from educational, performance, and career opportunities; dismissal of women’s musical activism as mere volunteerism; and critical approaches that cite women merely as also-rans are just some of the factors that have unfairly shaped the music historical narratives.  That is a much more important thing for my students to learn than any particular “masterwork” of the repertory.

Regarding the “impossible” rhythmic notation I note above, I thank William van Geest for directing my attention to this 2011 article by Julian Hook, in which the Wieck seems to be the earliest example among many similar examples from within the larger Schumann circle:
http://www.mtosmt.org/issues/mto.11.17.4/mto.11.17.4.hook.html
Email ThisBlogThis!Share to TwitterShare to FacebookShare to Pinterest
Labels: Clara Wieck, diversity, first editions, gender, Robert Schumann, the canon
Newer Post Older Post Home