I will begin with what was intended to be a digression, but has ended up taking over the post:

There is a charming detail of orchestration in the trio “Three Little Maids from School” in (Gilbert &) Sullivan’s The Mikado (1885).  Just as Yum-Yum, Pitti-Sing, and Peep-Bo are finishing up the refrain, they pause:

Three little maids who, all unwary,
Come from a ladies’ seminary,
Freed from its genius tutelary—

And in that moment, with the whole orchestra falling silent, a bassoon bubbles into life.


That bassoon idea was an afterthought.  A glance at the composer’s manuscript shows not just a blank bar at this point, but that originally he had notated a rest (in ink).  The bassoon effect has been pencilled-in later:
And there does not seem to be any document to establish with certainty when it was added.  By the 1880s, Sullivan’s practice was to sketch the musical numbers (and here is such a sketch for “Three Little Maids”), and then transfer the vocal lines onto the pages of what would later become the full score—ruling in the bars as necessary, but writing in only enough to give a copyist a means of preparing a sort of rudimentary vocal score for rehearsal.  The numbers would not be done in the order of the show:  the choruses and ensembles generally came first, with the solos later.  Only after the whole of the opera was “framed” would Sullivan turn to the orchestration, filling in the blank staves.  When the full score of a number was complete, the orchestral parts could be prepared and the keyboard reduction for the published vocal score finalized.

Mike Leigh’s 1999 film Topsy-Turvy, which dramatizes the months preceding The Mikado’s premiere, missed the chance to realize this moment.  Although there is a scene in which Sullivan has an exchange with the bassoonist, we do not see him have a flash of inspiration in the pit, handing down last-minute instructions to gurgle away.  Fun as that might have been, it is probably just as well that no such scene occurs, as we do not know that this episode occurred in the rehearsals for the first production.  Then again, the bubbling bassoon figure is played in performance in the movie, when by rights it should not have been.  It does not appear in vocal scores until the twentieth century; but admittedly, Sullivan took nowhere near as much care with the published scores as Gilbert did with the published libretti.  The absence of the bassoon whinny in the vocal scores (and the distinct piano-only score, which derives from the vocal score) is not strong evidence of anything beyond—as we know already—that it was not originally there.

Is it even the composer’s amendment at all?  I believe it is.  That the idea was an inspiration in the pit—as characterized above—is suggested by the notation in the manuscript:  the contour of the figure is there, but it is unclear what the pitches should be and one would certainly not guess from this scribble that the first note is d'.  This emendation his was not notated here for the eyes of a copyist; it appears to me to be nothing more than a hastily-added aide-mémoire to the composer of this addition.  Indeed, the strongest bits of evidence that this pencilled addition is indeed by the composer are 1) it is in the autograph, which in performances would have almost immediately been supplanted by a copyist’s conducting score of some sort; and 2) the bassoon is so imprecisely notated.  I would expect anyone else making such an interpolation to make it as neat as possible.  (In any case, the bassoon part needs the actual pitches much more than the full score does.)

For this to be Sullivan's own interpolation would require an occasion when the composer and his autograph score (not a company copy) were both together back in the pit to conduct a rehearsal, since this change could not realistically have been added during a performance.  As Sullivan generally did not often conduct after the opening night of an initial production, the possibilities for such an occasion after March 1885 are slim indeed.  He did, however, conduct the opening night of a revival at the Savoy Theatre on 6 November 1895, and he may well have rehearsed the company before that performance.  (Not having his diaries at hand—although they are extant—I cannot answer that question definitively at the moment.)

Two tidbits suggest that this 1895 production (rather than the original) was the occasion for the change.  One is the account of Thomas Dunhill, in his Sullivan’s Comic Operas:  A Critical Appreciation (1928):


[C]ould anything show more witchery than the use of the silent bar, just before the end of two of the verses?  Was Sullivan afraid that it could never be silent enough when, on the occasion of rehearsing one of the revivals, he broke this silence by pencilling a little curling phrase into the bassoon player’s part?  This stroke is amongst the most delicious of after-thoughts, but it is not in the original score.  One would gladly hear the passage both ways, on different occasions.  [pp. 131f.]

The second tidbit is that the 1893 full score of The Mikado published by Bosworth (a German firm  heavily backed by Sullivan) has the original gran pausa here:  the autograph seems to have been the source for the Bosworth edition, so if the amendment had been made by 1893, the lithographist preparing the new edition apparently didn’t take it seriously:
(I was a little surprised to find the bubbling bassoon absent from the 1907 recording as well, but in that instance the music had been heavily rescored to be audible with pre-electric technology, and I wouldn’t be surprised if the orchestration was done from the published vocal score, if not the Bosworth score—both of which lacked the figure in question.)

I have no doubt that—as Dunhill asserts—the idea is Sullivan’s own, but the case is not airtight.

As I say, all of this was supposed to have been a tangential point; I was going to introduce it because it seemed like an example of an musical detail conceived later than the rest of its context, perhaps suggesting itself to the composer because of the different activity—conducting a rehearsal with orchestra rather than composing in silence at his desk.  There are many examples one might use to illustrate such second thoughts, but I had thought this would be a fun one because some years ago I noticed that on 12 March 1885,  two nights before conducting the premiere of The Mikado, Sullivan had conducted Beethoven's Symphony no. 4 at the Philharmonic Concerts.  What if (I had thought) the giggling bassoon line was suggested to him by a celebrated bassoon solo in Beethoven’s finale?  (Granted, Sullivan's line resembles better the figures in the finale of Mozart’s Symphony no. 39, but never mind.)  Wouldn’t that be loverly?  Only as I came to look at it more closely did I see that there was not enough evidence to connect it to the Beethoven, so then I might as well use any example I liked.  I just got stuck on this one.

Having let the tail wag the dog for so many paragraphs, I will let the “dog” bark briefly here.  A few evenings ago I played the first movement of Alexandre Guilmant’s first organ sonata in a recital of “Scary Organ Music.”  It is a piece I first came to know as his Premiére Symphonie pour Orgue et Orchestre, op. 42 (1879)—hearing it (as mentioned in a previous post) in a splendid recording conducted by Yan Pascal Tortelier; only later did I learn that the work started as a work for organ alone, the Premiére Sonate pour Orgue, also Op. 42 (1874).  The piece works so well for organ and orchestra together that it is hard to fathom that it was not originally conceived that way.

Below is a stemma of sources for these two versions that I have been reviewing in recent months.  The shaded boxes are sources I have not examined; the red text/lines trace the transmission of the orchestral version, while the black follows the organ solo version.  It will be seen that there is a complex interrelationship between the two versions, as ideas that crept into the orchestration gradually make their way into the text of the solo version—a few in the second edition, a few more in the third.   (Double lines indicate reprints of the same text.) 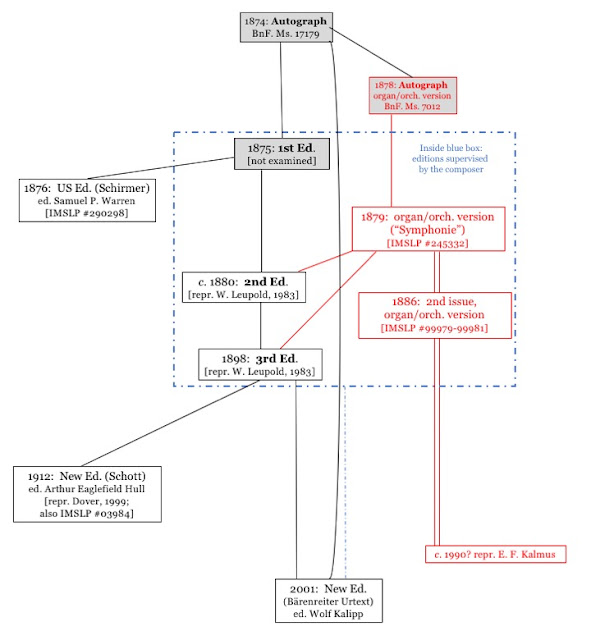 By far the bulk of these changes are rhythmic articulations where the original (in so far as I can determine it) had only sustained chords.  Thus, at the conclusion of the first movement (here copied from the 1876 Schirmer edition, but the Bärenreiter critical commentary testifies to the same reading in the autograph), Guilmant wrote:
In the second edition this passage already has some substantial changes (marked in red below).
All of these, in fact, have their origins in the orchestration, the chords at bb. 355–56 rearticulated with an antiphonal effect between organ and orchestra, and the brass introducing the new figure at the final cadence (with consequently shorter note-values for those penultimate chords):
Rather than belaboring this point (as I had originally intended to), I will confine myself to one additional example—a change which does not make it into the sonata until the 1898 third edition, although clearly comes from the 1878 orchestration.  Here is the opening of the first movement as in the Schirmer edition (and the reading is identical (save for French-language registration markings) in the second edition):
Now here is the opening of the first movement as in the third edition:
(And don't get me started about all those slurs.)  Again, the dramatic rhythmic punctuation—which he has very cleverly accomplished by the engaging of a manual coupler to a chord already being sustained—has its origins in the orchestration:
Clearly Guilmant liked the effects he had devised for the Symphonie, and he found ways of folding them into the Sonate.  This evokes The Mikado—not just the added bassoon in “Three Little Maids,” but also one of Gilbert’s lines of dialogue.   In Act II Pooh-Bah justifies his graphic embellishments to Ko-ko’s (entirely fabricated) account of executing the emperor's son thus:


Merely corroborative detail, intended to give artistic verisimilitude to an otherwise bald and unconvincing narrative.

(Actually, this takes us back even to Topsy-Turvy.  If the film missed the opportunity of highlighting a textual change of the score, it does in fact depict Gilbert making a textual change to the libretto during a rehearsal, adding the word “otherwise” to this line.  I am not aware of any evidence to support that, but it is a nice moment.)

If we take Pooh-Bah’s “corroborative detail” to be ameliorations made after the fact to an original that was already sufficient in itself, then these details manifest that sort of corroboration.  Neither “Three Little Maids” or Guilmant’s organ sonata is “bald and unconvincing” in its original version, but I think the addition of a little corroborative detail paid off in both cases.