23. Tidbits at the first milepost

The subject of this eighth installment of the Settling Scores

comes about by chance.  Quite independently of this project, I had set myself the task of studying all of Bach’s extant cantatas in more-or-less the sequence in which they were performed during his first few years in Leipzig.  (I will go back later to pick up the earlier cantatas—those, anyway, that he isn’t known to have reprised.)  This project occurred to me a few years ago when reading Music in the Castle of Heaven, a stimulating Bach book by John Eliot Gardiner, who himself undertook a different sort of Bach cantata pilgrimage in the Bach anniversary year, 2000.  Gardiner’s book was for me a healthy resituating of the context, especially as he gives much more attention given to the vocal works than to the instrumental works.  (Moreover, Thuringian potato farming had never before crossed my mind.) 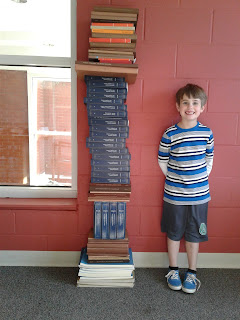 Gardiner inspired me to go through the cantatas methodically, giving myself basically a week with each—looking, of course, for specific ways in which Bach himself developed over the years.  I splurged on a copy of the NBA study scores of the complete set of cantatas (and when Bärenreiter tweeted asking for pictures of “towers” of their publications, I obliged with this [at right]—even just my NBA holdings now loom over my middle child).  And so I started in the first week of June with his first cantata for Leipzig, BWV 75 Die Elenden sollen essen, written for the first Sunday after Trinity, 1723.  (At the moment I’m a little ahead of the liturgical calendar, as Easter was later this year than it was in 1723, but this allows me to get Advent in the right place.)

On Sunday, 4 June, I listened to the cantata and read what Alfred Dürr had to say in his magisterial survey.  On Monday, I went through the score and listened again, and then that evening idly opened the relevant Kritischer Bericht of the NBA.  I wasn’t expecting my listening project to be a topic for this blog, but already I find interest stirred by textual minutiae—the “trees,” so to speak, that may well prevent me from giving Bach's “forests” my full attention.  I think I have written already that I can’t look at a critical report without finding something that is curious enough to make me want to say “Hey, listen to this....”  (In this respect I am particularly blessed to be married to a musician; she is used to hearing me go on about such trivia, and while she may not particularly care about it, she at least understands why I do.)

C. P. E. Bach inherited the now-extant autograph score after his father’s death, but the work is mislabeled in the subsequent catalogue of C. P. E.’s estate.  It is listed there not as “Die Elenden sollen essen” (the first words to be sung) but as “Was hilft des Purpurs Majestät” (the beginning of the recitative that follows the opening chorus) because his economical father had used the empty staves under the chorus to write in the recitative.  “Was hilft” are thus the first words to appear in the score, and the hasty cataloguer of the estate skipped the title page and copied merely the words on the first page of the score, not recognizing that the beginnings of two consecutive movements appeared together.  The first page of the autograph score is shown at right; I have added a red-dotted line to divide the opening chorus at the top of the page from the first recitative at the bottom, and I have circled the quoted text.

The BG edition omits fourteen bars in the middle of the first aria.  This was discovered by Robert L. Marshall more than 50 years ago, but IMSLP users (or those who use Kalmus reprints of it) may well be unaware of the omission.  It is an egregious textual error:

This parablepsis is easily explained, as it relates directly to curiosity no. 1:  the opening chorus is so long that not only the first recitative but also this first aria is notated one-system-at-a-time at the bottom of the page.  The first movement ends on the same page (a verso) that concludes with b. 111 of the aria.  On the facing recto, Bach continues with b. 112 at the top of the page—for the first and only time in that aria.  Wilhelm Rust, the BG editor, overlooked this and the following system as he was preparing the third movement, as for the previous eighteen pages he could safely tune out everything at the top of the page (material that he would have already dealt with for the first movement).  He didn’t realize that he had omitted fourteen bars, but he must have noticed something was wrong, as he altered the text in order to make syntactic sense.

Hypermeter (that is, groupings of bars in strong-weak patterns).  Much of this is obvious without turning to the critical report—for example in no. 10, an alto aria notated in 3/8 time, but in which the only bar that is a simple 3/8 bar is the very first one.  All the rest are grouped together by means of short barlines into groups of two (effectively 6/8) or, occasionally, three (= 9/8).  I am reminded of Beethoven’s instruction ritmo di tre battutte in the Scherzo of Symphony no. 9—although, with no timpani thundering away here, it may be less obvious to the listener.
Although Bach does not always notate these short barlines in all three staves, the pattern is clear.  He is thus more consistent in his usage here than, for example, in his autograph of the Corrente of the B-minor solo violin partita, BWV 1002  There the hypermetrical paired bars of the musical material is clear enough, but it is hard to know from his notation whether he intended short barlines to indicate the hypermetrical groupings (as above in BWV 75), or if these were merely a matter of notational convenience—that is, a short barline (not always the same length) in the immediate (i.e., vertical) proximity to each note on either side of that barline.  Without pushing any argument here beyond this, I have circled below in red those short barlines that are placed close to the notes before and after; in green the strongest evidence that these barlines are indeed intended to be short (together with the fact that his full barlines tend to extend either above or below the staff, or both); and in blue the two instances where the full barline before the putative “weak” bar is again proximate to the notes on either side (in both cases the d and c in the staff).
A further hypermetrical curiosity in BWV 75 is a change Bach made as he prepared the manuscript.
Although it manuscript is very clean (and Stephen Crist has unraveled fascinating evidence by comparing this clean manuscript with the unusually messy manuscript of BWV 76, the cantata that followed it for Bach’s second week in Leipzig), as he began no. 5, a soprano aria with obbligato oboe d’amore, he first notated the solo part with the time signature C, immediately cancelling it by superimposing 3/8.  (As shown at right, the other two staves have 3/8 from the start.)  I have puzzled over this.  This aria proceeds in a regular pattern of 4-bar groups (with few deviations); was he thinking of [re-notating?] it as a compound meter, essentially 12/8?  (If so, why not just write 12/8?)  Was it merely a slip of the pen?  Very curious indeed.

Are we having fun yet?

Neither the BG nor the NBA text accurately reflects the autograph’s rhythmic notation for the Oboe d'amore in movement five (the beginning of which is pictured above), but this is because the editors sought to present what they surmise Bach intended rather than what he ultimately left on the page.
The opening figure of the oboe d’amore ritornello recurs as a primary motive in the solo vocal part, but by the time he wrote the vocal entry he recognized that the placement of the dotted rhythm made for very awkward text declamation.  Consequently he moved the 32nd-note earlier in the figure [at left].  The discrepancy between the oboe figure and the vocal figure continues in the autograph until b. 59 (an incipit indicating the repetition of the opening ritornello), at which point he wrote the revised (that is, vocal) rhythm into the instrumental part.  In no instance, however, does the autograph show any signs of an alteration to the rhythm.  Both the BG and NBA presume (reasonably, but not inevitably) that the rhythm should be made uniform throughout.

These were not the only curiosities in this work (for example, how the 32-bar choral setting concluding each part of this cantata was later transformed into the 39-bar setting that concludes BWV 100)—and of course one wouldn’t have to resort to the critical report to find all of these.  Still, I think it is a pity that musicians generally seem to regard the critical reports—even without looking at them—as dry if not actually intimidating.  Admittedly they are not generally page-turners, to say the least.  For Americans, it doesn’t help that they’re often in a language other than English, and even when they are not the technical language can seem impenetrable.  But it doesn’t take long to get used to them with their specialized vocabulary and the ubiquitous abbreviations.  After I got this blog off the ground, a colleague remarked to me that “it’s sort of like you read the critical reports so we don’t have to.”  I hope that’s not the case.   And I greatly respect those editors like Jonathan Del Mar who make a genuine effort to make their commentaries as lucid and even winsome as possible—editors, that is, who seem to take real joy in communicating with others about their work, rather than regarding the critical report as a contractual obligation of unutterable drudgery.  There is buried treasure in many critical reports, a subject I will return to time and again, I’m sure.